Since we opened our doors in 1990, Elderday Center offers a comprehensive adult day program of socialization, recreation and health maintenance that reinforces each participant’s self-worth and dignity while enhancing current skills and abilities.

HISTORY
In 1987, a $20,000 bequest was made to the St. Charles Congregational United Church of Christ. The bequest stipulated that the money be used to establish a senior citizen program. Local ministers identified the need for programs designed for the less mobile senior elderly and their families. The Church researched the concept of Adult Day Care which was a new concept in the United States at that time. The Adult Day Care model was conceived in the United Kingdom in 1970’s as a push towards deinstitutionalization of seniors who were prematurely placed in nursing homes. The goal was to keep senior citizens in their communities, homes and with families for as long as possible. Independence was a key tenant of Adult Day Care, even back in its initial stages.
The Elderday Board of Directors, established in 1989, included representation from the Tri City area churches and professionals, including the health care field. The Northeastern Area Agency on Aging, Community Contacts, local social service agencies, hospital discharge planners and churches were used as resources in identifying the need and in designing the Elderday program.
The Elderday program was the first Adult Day Care program in the area and Elderday opened its doors in November of 1990. A fulltime director and part time activity director were employed to operate the program. The program had three clients and operated two days per week.
SERVICES 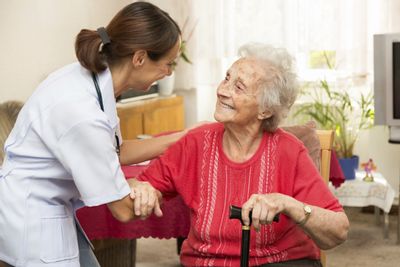 Elderday just celebrated is 29th year of providing a comprehensive adult day program of socialization, recreation and health maintenance that reinforces each participant’s self-worth and dignity while enhancing current skills and abilities. Our team carefully researches and plans our programming to better meet the needs of those who attend. Each activity is therapeutic and works on memory, cognition and fine and gross motor skills. Together these aspects help participants improve their quality of life, maintain or slow health deterioration often associated with aging and keeps our participants as independent as possible.
As we say here at Elderday…. ”When you’re at Elderday – you’re with family.”
HOURS
Elderday Center is open Monday-Friday
For more information please call 630.761.9750